I am a practicing visual artist who lives and works in Canberra. My background is in printmaking and my work is informed by the way scientific technology has influenced visual media and contemporary art. You can view more of my work at www.ericaseccombe.com.au

My application to Synapse Residency Program is based on the strength of the collaborative relationship I have already established with the ANU Department of Applied Mathematics in the School of Physical Engineering and Physics.

I initially approached the Department in 2005 and in 2006 I commenced a 3-month artistic residency supported by an artsACT project grant. At the time my residency coincided with the preliminary stages of the Departments XCT Facility and I was fortunate to have the support of Associate Professor Tim Senden who facilitated the XCT scanning of a selection of my collection of miniature plastic animals. To visualise and animate these datasets I was required to learn how to independently use Drishti: a volume exploration and presentation tool developed by Dr Ajay Limaye. At the time Drishti was in its formative state I was the primary user and tested various capacities with each new upgrade; an intensely challenging process. The result of this association can be seen in my subsequent works Nanoplastica (2008) and Ocular (2006). (image Slug, part of the Nanoplastica series, 2008) 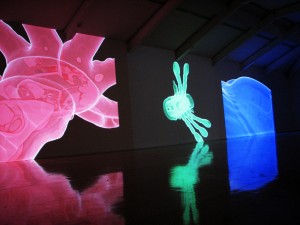 Nanoplastica installation at Canberra Contemporary Art Space, 23 May - 5 July 2008, site-dimensions; CCAS main gallery 20390 cm wide x 8750 cm depth, with a ceiling height of 4450 cm from floor to the beginning of the roof beams.

Nanoplastica was exhibited at Canberra Contemporary Arts space (2008) and then later projected on the BIG SCREEN at Federation Square, Melbourne, (2009). The first edition of Nanoplastica was acquired by Canberra Musuem and Gallery in 2008. Ocular (2006) the first work in this series of 3D animations, was exhibited in the exhibition Super Natural, at the Alsager Art Centre in Manchester University (2006). Nanoplastica is also included in the exhibition Linear Progressions as part of the National Science week beginning 14 August 2010, screening at QUT Creative Industries Precinct Parer Place, Kelvin Grove Urban Village screens, selected Screens at Gardens Point & Federation Square.

On the strength of these works and investigation, I returned this year to the Department of Applied Mathematics as a Visiting Fellow supported by a 2010 artsACT project grant. And now the Synapse residency program has enabled me to continue this project in depth at a collaborative level.

The Department of Applied Mathematics is mix of research physicists, chemists and mathematicians with broad interests in the form and function of matter. They are recognised for groundbreaking research into processes involving complex materials and networks. Already their results are challenging theoretical knowledge of the structure of matter, including the established understanding of evolution. The Departments technology and software has greatly extended their experimental capabilities, causing scientists from a wide range of disciplines to re-evaluate how they now approach their research. The facility offers the highest fidelity computer tomography possible today. These XCT instruments were designed and built in-house and they scan objects in 3D datasets, (not in slices). The Facility is supported by APAC, Australia’s largest public supercomputer centre which maintains an enormous volume (several Pbyte) of archival storage at the ANU. Through the XCT the Department has attracted a wide range of business partners and is now an advisor and supplier of this equipment to similar research and industry facilities throughout the world.

My proposal to Synapse is to collaborate with the Department of Applied Mathematics’ Dynamic XCT project. A team is currently researching the visual possibilities of computer tomography in microscopic kinetic systems; such as limestone rock dissolving or water wicking through fibre. Scanning of static objects is now considered routine while research into new methods for studying dynamically changing systems in 3D on the microscopic scale is just beginning. My collaboration will focus on two aspects of their data.

Firstly, the understanding of the complex interrelationship of mechanical tensors in 3D. The 3D fabric of a rock or bone encodes the mechanical properties of the object.  The complex interplay between structure, form and material composition can only be solved using a super-computer. For a material under stress each point in space can be described with 9 different components, or tensors. Understanding how each tensor correlates to a particular mechanical property could greatly improve interpretation. Turning 8 billion volumetric data points, each point possessing 9 properties, into a meaningful image involves the use of animation, and a deep understanding of colour and light.

The second aspect of their new experimental capability is the acquisition of 3D in cinematographic mode.  The ability to study the time evolution of 3D systems such as moving sand grains, fluids flowing in rocks or seeds geminating is only marginally feasible at present.  This group is soon to patent a novel method for acquiring 3D datasets in very short times. The visual density of grains moving in a sand pack, for example, is far too great to observe unless the key parameters are singled out.  These might be, in this case, the portrayal of the rotational axis with time. Systems in which 150,000 grains are tracked look dense and intractable.

With this project the Department is aiming to balance visual density with information content. Scientists are used to graphing data, however in 3D, and in particular multi-dimensional data, the portrayal of dense datasets is not a simple task; the inter-relatedness of properties and structures maybe complex and non-linear. The team recognises that perception is guided by a visual sense, and the group is developing a visualisation toolbox to enable this next leap forward.

Much of the Departments research is driven by international oil and gas company ventures, which in turn validates their investment in the XCT facility. As part of my collaboration I am also proposing to contribute to the Dynamic XCT project by scanning the germination process of seeds for my own artistic purposes. In 2006 my plastic objects became perfect sample datasets for assessing the various associated visual systems and demonstrating data visualization across disciplines. My new proposal will be a good trial product for the team because organic matter has very little density in comparison to rock; the scanning time will be reduced, datasets more readily understood, and the dynamic sequences theoretically predicted.

This entry was posted in research and tagged XCT. Bookmark the permalink.