There was a news article circulating this week about Ron Sveden of Massachusetts who thought he had lung cancer but luckily for him the growth turned out not to be a tumour but a pea sprouting; proving that those hardy crop seeds will grow in the most extreme conditions!

Thanks to the team, I now have the first image and the last image of the seed sprouting sequence. So here you can see what the two end captures look like if they their transfer functions are overlayed.

The first and last 3D volumes of the seed spouting sequence rendered in Drishti. The third image on the right is the two volumes overlaid as transfer functions.

Tim selected and set the base volume so that each new frame can be positioned in a template. Later I watched Ajay manipulate the transfer functions in order to isolate the beans from the bed of agar. He made some suggestions and showed me how he would do it by using the crop tools in combination with the transfer function. He does it expertly and I follow his methods on my own from scratch, taking me a full day to correctly capture one bean compared to Ajay’s 15 minutes.

I met two Palaeontologists in Vizlab this week, Dr Gavin Young and Alice Clement who are working with Tim on the XCT capturing the most amazing volume data of a lung fish, comparing aspects of the nervous system between live species and ancient fossils. They had come in for a lesson on Drishti with Tim, and we shared a moment commiserating on our bumbling efforts in comparison to the masterly skills of Ajay. One of the difficulties experienced by infrequent users (or even frequent users) is that Ajay constantly improves Drishti’s tools, renovating the user facilities.  So is important to be able to understand what the updates are and how they work for the data at hand. I have learnt to just persevere while referring to Ajay’s handy online instructions; then it is possible to succeed no matter how clumsily. Drishti is freeware and is now available to down load to PC or Mac so researchers are not limited to working at Vizlab, but there I have the added advantage being a stone’s throw away from Ajay. 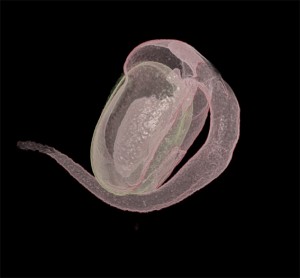 I think it is amazing that we are looking inside a tiny bean. We predict that the difficulty we will encounter with the final bean sequence, when we proceed with animating the full dynamic process of sprouting, is that every volume in the sequence has a unique transfer function. For the moment it is not such an issue with only a few volumes but it will begin to cause difficulties with more than 5. We may have to rethink how they are linked together. However for the moment its giving me an excellent opportunity to hone my Drishti skills. To get a cleaner image I isolate one bean and clean it up as much as possible so the interior is visible through the fine outer skin. I have rendered an image (above) of the bean and its sprout overlayed, the two volumes differentiated by the colour yellow and pink. And below are two screen shots to compare the transfer functions of the first and last volumes before they merge. 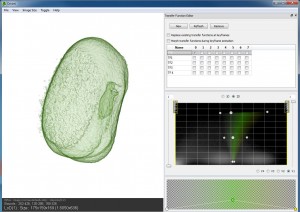 If you take note of the white shadows in the histogram you can see how I’ve selected the space in between. This is the thin corridor of material between the agar jelly and the bean’s starchy interior. It allows me to examine the transparent outer shell while viewing internal cavities. 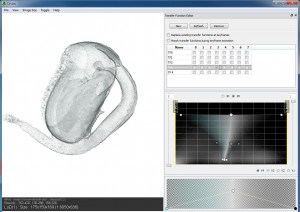 A screen shot capturing the end sprout volume in Drishti.

In this screen shot you can observe the comparative transfer function. It is different because the fragile sprout is not contrasted enough with the agar. You can see how the end of the sprout is a bit messy from being embedded with the base.