The Department of Applied Maths is situated in a group of buildings spanning Cockcroft and Oliphant at the back of the ANU, looking out toward the mountain range beyond Lake Burley Griffin. Beside Cockcroft stands the forty meter Heavy Ion Accelerator Tower. While the structure itself is architecturally unexceptional, it is a personal landmark as I drive around Black Mountain on Parkes Way, or ride along the lake. Knowing that the tower has a function central to research in the Nuclear Physics Department, I have never thought to ask what is inside the tower, so it is a surprise when Tim Senden tells me we are going on a mystery tour. We meet with Dr Nikolai Lobanov who is the Engineer Officer in the Department of Nuclear Physics, and he hurries us into the main building which houses the particle accelerator. Not only does Nikolai move fast, he speaks quickly with a classic Russian accent. He ushers us into a lift that hasn’t seen a refit since the facility was commissioned in 1974, and it doubles as a small museum full of photos and documents regarding the accelerator. As I’m not sure where I am being taken or what a particle accelerator looks like, it is with some trepidation that I commit to squeezing my butt through a small, round submarine like hatch. 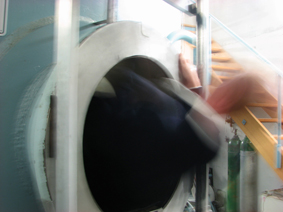 Tim Senden sliding into into the tank hatch

We enter into a cramped, dark, circular chamber with a very low ceiling. Lit only by a couple of  fleuro tubes, the tour begins with Nikolai generously explaining the function of all the components making up the accelerator before us. While I understand about every sixth word it is obvious Tim’s super brain is taking it all in. I learn that the complicated apparatus before us is constructed of thousands of ceramic disks that fit together in a way that that no metal components touch. But not yet realising we are situated at the top of the tower, it is disorientating when the metal floor begins to descend. I discover that we are actually suspended on a metal platform inside a huge concrete tank, like the interior of an enormous nuclear warhead, causing me to think briefly of Stanley Kubrik’s Dr Strangelove (How I Learned to Stop Worrying and Love the Bomb). The accelerator is the long, shiny central column encased in thousands of metal hoops, around which the platform, a donut shape, moves up and down, enabling access to the technicians who periodically service the accelerator. It can only be entered when the tank is emptied completely of the sulphur hexafluoride gas used to insulates the accelerator under high-pressure. The steel and ceramic components can be replaced ingeniously in sections even though they are all pieced on top of each other for twenty meters. Nikolai takes a Polaroid of us to add to the collection of intrepid tank visitors; few people get to access the interior; this even being Tim’s first time so I feel incredibly privileged, noting the small rows of signatures on the wall above the top hatch. The only other hatch is at the bottom so if you get stuck half way it would be a bit of a bother to get out.

observing the top of the tank as we descend on the platform.

Before we set off on our journey down the accelerator, Nikolai points out to us the marks from arcing on the ceiling. It’s the only physical evidence to a non-scientist of the power of this mighty apparatus. What the heavy iron accelerator produces is speeding particles in order to probe the nature of matter. It speeds up charged atoms to ten percent of the speed of light and then these speeding ‘bullets’ can then be used for a range of studies, including some high powered materials science. The ANU’s accelerator is one of the world’s largest Van de Graaff generators – you know those mad balls that create enough static electricity to make your hair stand on end – but it has the capacity to generage enormous voltages of 15 million volts and more. This level of voltage is used to accelerate charged particles (ions) sufficiently to overcome the strong electrostatic repulsion between atomic nuclei (which are positively charged so they repel), allowing the study of one of the fundamental but least understood forces – the strong nuclear force.  The particle accelerator supplies high energy ions for a variety of purposes ranging from studies on the structure of the nucleus, interactions between nuclei, materials science, global climate change, bio-medicine, archaeology AND of course, the XCT facility. 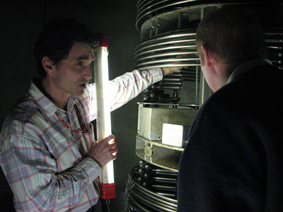 As Nickoli points out to us the twenty meters of nylon and steel chain that whir around at a speed of over 50 km per hour, I try to envisage the sub-atomic world of the nuclei, speeding around and repelling as positive and negative charges. I can’t help but consider Marcel Duchamp’s The Bride Stripped Bare by Her Bachelors, Even (The Large Glass) (1915-1923). Duchamp was preoccupied with concepts such as radiation, X-ray, electricity, electromagnetism and radio waves and this particular work encompasses many of these themes as a way of describing the rapidly changing world of technology, science and social relations at the beginning of the 20th Century.

There is much of the intricacy of the accelerator that reminds me of the aesthetics of the Large Glass, if not the concepts of speeding particles. Perhaps it is an artistic simplification but for me the corresponding themes resonate. The discovery of the atom and the development of nuclear energy has played a major part in shaping our society and modern culture; the products of which motivates my own art practice. 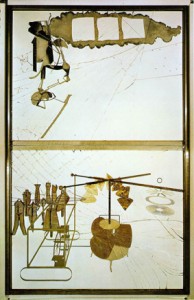 Marcel Duchamp, The Bride Stripped Bare by Her Bachelors, Even (The Large Glass) (1915-1923). Philadelphia Museum of Art collection.

As an artist utilising X-ray technology I think it is important to refer to Duchamp (1887-1968) who referenced the new discoveries of science and technology in many of his artistic projects. Duchamp was born into an era where new discoveries concerning the nature of matter and energy rapidly succeeded one another and were widely publicised in the popular press. After X-rays came radioactivity and subsequently, the development of practicable wireless telegraphy, allowing undreamed-of communication over great distances. There is a fantastic book by Lynda Dalrymple Henderson, Duchamp in context: science and technology in the Large Glass and related works, (Princeton University Press, New Jersey, USA, 1998). According to Henderson, The Large Glass, ‘can be recognised, as it should be, as a remarkable synthesis of contemporary ideas that stands as one of the great monuments of early twentieth-century art and culture.’ (Henderson p. xxiii). Each part of The Large Glass has particular significance to the overall concept including the eight-year period in which it was constructed. Duchamp even referred to this extended development as a delay, one of many metaphors he used to describe scientific endeavor.  As a model for scientific thought, The Large Glass also beautifully integrated into its historical narrative the added possibility of uncontrolled circumstances such as the shattered glass. For Henderson, to understand The Large Glass is also to be able to understand the history of science as it emerged and shaped the modern world.

Painting could no longer express all of these ideas for Duchamp so he created the structure of The Large Glass with oil, varnish, lead wire, lead foil, mirror silvering, and dust on two panels (cracked), all sandwiched between two glass panels, held in a steel frame which stands at  277 cm high x 176 cm wide. In responding to new ideas Duchamp transcended traditional concepts of perspective in 2D painting to 3D sculpture, and experimented with transparency through the use of glass.  In his own words he described The Large Glass as constituting, ‘ … a rehabilitation of perspective, which had then been completely ignored and disparaged. For me perspective became absolutely scientific.’ (Henderson, p. 38)  This work requires further interpretation in context of Duchamp’s numerous notes which he released in box sets over the years until the 1960’s. Duchamp could use contemporary developments in electricity and electromagnetism, for example, to comment playfully on sexual relations, without any pretence of discovering new principles of physics. (p. 74). The theme of collision between the Bride and the Bachelors which recurs in Duchamp’s notes is just one of many clues to the first part of the title. According to Henderson this aggressive situation is a demonstration of Duchamp’s penchant for analogies when cross referencing disciplines and it ‘is very likely rooted in the alchemical imagery of stripping and purifying metals before they are symbolically united as bride and groom.’ (p. 86) The imagery in his notes about collision relate to physics and chemistry in their formal language, ‘and perhaps more specifically to the high speed electrons and radioactive particles often described in terms of speeding projectiles and bombardment.’(p. 86). It is with a new perspective I can now observe the tower through it seemingly ordinary exterior, as if with X-ray vision. I can visualise the vertical tank and imagine the activity of all those nuclei travelling about and see the multitude of wires, conductors and beamlines that make up the tower and the enormous facility branching out below.