On Wednesday this week I presented a public lecture about my project at the ANU School of Art. I thought this would be a good opportunity to explain my journey from Printmedia to Applied Maths, my relationship with the Department, what relevance is my project to an art making practice, how the themes in my work have developed, how the technology I have access to has changed dramatically over the last fifteen years, and why it was important to receive funding from organizations such as ANAT to be able to undertake such a project. 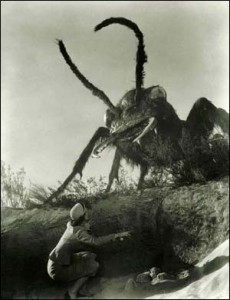 I used this image as one example of how microscopy has influenced our imaginations as illustrated in popular culture. A still image from Them!, a 1954 American black and white science fiction film based on an original story treatment by George Worthing Yates; developed into a screenplay by Ted Sherdeman and Russell Hughes for Warner Bros. Pictures Inc.; produced by David Weisbart and directed by Gordon Douglas for the company. Starring James Whitmore, Edmund Gwenn, Joan Weldon (featured) and James Arness.

What helped consolidate my ideas for this talk is the slow process of populating my website with projects I have developed over the last 15 years. Writing this blog about my current project was extremely useful and I used some of the screen captures for Drishti that I have posted. But in reviewing essays or blurbs previously written about the work and revisiting some of the ideas I had been researching back then, I found that many of the themes in my work are recurrent; science, space travel, atomic energy, molecules, radio waves and telecommunications and scale.  I have always been challenged by wanting to express the sense of awe and wonderment in discovery, particularly in the way advancing technology was changing the pace and shape of society, without making work that ends up being whimsical.

Examples of these works are on my website www.ericaseccombe.com.au

I am often asked what the connection is between printmaking and the technology I am using now. I remember being drawn to printmaking in the early 80s because of the mechanical aspect of the image making process, the possibilities of multiples, immediacy and the democratic distribution of images. For the same reasons I was seduced by computers, for both their word processing and image making tools. It is now interesting to reflect on the recent introduction of computers to our society and how quickly we forget what it was like without them. Remember using floppy discs and having to reinsert three or four of them to save one file? It was only in 1994 that zip discs were launched with 100 MB of memory. When I worked as a free-lance designer I had an extra bag to carry around countless zip discs and my portable zip drive. Recently I was pleased to discover how I could purchase a 1 GB memory stick for less than $20.

Likewise, the computational extension of vision, which is the basis of the XCT facility, has only been made possible by the rapid improvements and capabilities of computer technology. The Department of Maths XCT Facility is supported by APAC, Australia’s largest public supercomputer centre which maintains an enormous volume of archival storage at the ANU. The storage is estimated at several petabytes, and one Pbyte is equal to one quadrillion bytes. APAC has its own air conditioning system to keep all those computers from over heating. 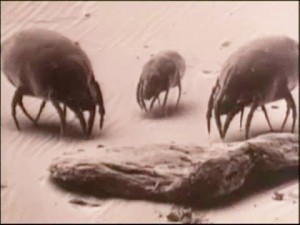 Another interesting example of the extension of vision through microscopy. I showed the audience this excerpt 'We are not alone', from a 2007 natural history documentary 'The invisible world.' I've linked this image to the movie on You Tube.

This talk gave me the opportunity to cover many of the questions I have about new technologies and the art making process. For example if we live in this era of accelerated visual information saturation, how it is possible that art in the 21st century can be more than just a reflection of over exposure? Or if art is directly inspired by scientific knowledge then can it reflect more than just the visual account of a body of knowledge? And what happens to art when it is made with the latest technology? What happens when that technology is superceded?

Just before the talk began Ajay came in and sat in the front row of what was becoming a very full room. I was already feeling really nervous about presenting this work; I often find it hard to talk about my own work in context of what the Department is doing and I worry that what I am doing is not particularly interesting in comparison. Or that I’ll say something totally stupid, or someone will ask me a really hard question. And I fret that my work is boring. However, my fears were unnecessary, it went well and it was good for me to put my practice in perspective.

Most importantly Ajay really liked my animation of the clipping planes. He’s challenged me to make a similar demonstration of using the cylindrical crop tool.

And thank you to Waratah Lahy, Gordon Bull and Anne Brennan for the opportunity to talk a the School of Art!

This entry was posted in presentation, research. Bookmark the permalink.