Professor Röntgen at work "in the midst of an experiment on the new light". Walter. E. Hodgson in 1896 for The Windsor Magazine.

‘I didn’t think, I experimented‘

The words of Wilhelm Conrad Röntgen (1845-1923) whose discovery of radioactive waves and the process of x-ray revolutionised our understanding of the physical world. Where matter was previously solid, X-ray challenged the surface or appearance of things. In 1895 Röntgen was studying the phenomena accompanying various types of vacuum tubes when an electric current passes through a gas of extremely low pressure. He was investigating the properties of cathode rays, a field of research established by the scientists Plucker (1801-1868), Hittorf (1824-1914), Varley (1828-1883), Goldstein (1850-1931), Crookes (1832-1919), Hertz (1857-1894) and Lenard (1862-1947). ‘Cathode’ was the name Goldstein gave to the electric current generated in a rarefied gas environment by high-tension electricity from Heinrich Ruhmkorff’s induction coil, which was the first type of electrical transformer.  The critical conceptual path for the cathode tube also leading to modern optical technologies such as television.

Röntgen’s investigation led him to discovering a new kind of ray when he encased a cathode tube in cardboard and aluminium to protect it from a strong electrostatic field. While the light inside was contained he noticed a green fluorescent glow emitting from around the casing. From there Röntgen developed his experimental findings further. As the story is now told; working in his darkroom on the evening of November 8, 1895, he sealed a more robust glass tube in thicker black carton. Placing a paper plate covered on one side with barium platinocyanide in the path of the rays, he found that it became fluorescent as far as two metres away from the discharge tube. Subsequently during following experiments he realised that by immobilizing objects of varying densities and interposing them in the path of the rays against a photographic plate, would result in a recorded image revealing a transparent interior. The now famous image of his wife’s hand, complete with wedding ring, is considered the first “röntgenogram” ever recorded. The X in X-ray was Röntgen’s symbol for the yet unknown quality of the ray, and I guess the name just caught on. He won the Nobel Prize in 1901. Later on the physicist Max von Laue (1879-1960) worked out that X-rays have the same electromagnetic properties of light but have a higher frequency wavelength, for which he was awarded the Nobel Prize in Physics 1914 for his discovery of the diffraction of X-rays by crystals.

It is hard today to comprehend the excitement that such a discovery would have caused when images of these X-rays were first published in the early 1900s. For many X-rays were the first scientific proof of the fourth dimension as ‘glimpses into the invisible’. (Linda Dalrymple Henderson, The Fourth Dimension and Non-Euclidean Geometry in Modern Art, PUP 1983, pg 285) It initiated forms of occultism, its members believing that X-ray might also prove there is a soul. Forms of spirituality, telepathy and clairvoyant vision were popular among many avant-garde artists. Curator Corey Keller explains that not long after the first X-rays images were publicised, do-it-youself X-ray kits became commercially available to anyone who wanted to take up this new form of photography. Because of their relative thinness, human hands became an easily acquired image and it became popular for the rich and famous to immortalise their skeleton fingers and wrists draped in jewelry. [in the exhibition, BROUGHT TO LIGHT Photography and the Invisible, 1840-1900, San Francisco Museum of Modern Art, 11 October  2008 –  4 January 2009] 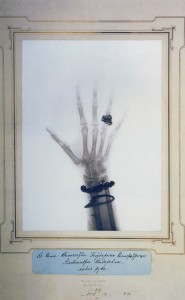 Enthusiasm for X-ray photography most probably waned when the harmful effects of radiation exposure was finally established, but in the beginning photographers who had access to this new form of light, trained it on just about anything just to see what it looked like. This is still very much the philosophy of contemporary X-ray artist Nick Veasey who has his own large format X-ray studio, who believes that;

‘We all make assumptions based on the external visual aspects of what surrounds us and we are attracted to people and forms that are aesthetically pleasing. I like to challenge this automatic way that we react to just physical appearance by highlighting the, often surprising, inner beauty.’ Nick Veasey www.nickveasey.com.

Visit his website to view the wide range of static subjects that Veasey has X-rayed, from flowers to airplane complete with hangar. There is a lecture he gave on TED where he describes how he photomontages the bigger pieces together. Veasy is also concerned about the digital age and image consumption, particularly in the age of security surveillance technology.  Believing that his work is a process of counteracting a loss of individual freedom he seeks solace in classic images natural beauty and general curiosity. I agree with Veasey in some respects, but I am inclined to think that there is something startlingly confronting and alluring about candid X-ray photography that takes this technology further than the static, traditional still life X-ray may reveal. 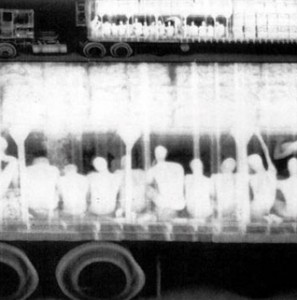 Human Cargo. This X-ray photo was taken in March 1999 by Mexican authorities who use X-ray technology to uncover illegal arms and narcotics. Mexico also faces the problems associated with human trafficking.

I remember the first reaction I had to newspaper image of a truck full of human cargo at a boarder check-point. Exposing more than just an interior, this image symbolises the desperate hopes of people who were either risking their lives for a better future, or who had found themselves trapped in a nightmare beyond their own control. Consider now that X-rays are installed in some airports; there is an argument that we will have no control over the dissemination of these images that reveal our private unclothed bodies, but perhaps collected over time these images will also capture some deeper insights into the contradictions of human nature; or maybe not.

But these images are not to be confused with the kind of morbid curiosity that draws us into other types of X-ray image; like the allure of a side-show exhibits. I’m sure I remember in the 1990s a daring X-ray of two men locked in anal sex, the image posted on a massive billboard on Oxford street (I may have made this up!).  I also once met a sword swallower, and these people I knew who were medical students X-rayed him swallowing his sword deep into his gullet, his multiple piercing highlighted along his tongue and nipples.  In fact I’ve found a site of similar sword swallowing images complete with X-ray movie. And then there are the peculiar X-rays of rectal foreign bodies such as vibrators, oranges wrapped in nighties, torches and drink bottles…well, you can search the web yourself if you want to pursue these kind of images. 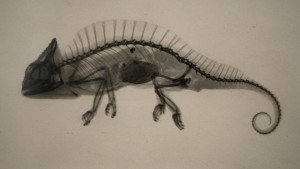 After a whole century has passed it seems that X-ray images can still be captivating even in the age of digital saturation. But it is interesting to consider that the Aboriginal people of Arnhem Land continue the 4000 year old tradition of ‘X-ray style’ rock painting.  This is where natural or spiritual beings are depicted with the viscera and skeletal structures clearly visible through the external outline, and these works represent sacred ancestral images and important food sources. According to Jennifer Wageli on the Metropolitan Museum of Art website, after European contact some paintings illustrated rifles with bullets visible inside. The Arnhem Land people had developed a sharp, imaginative and perceptive technique in order to record knowledge through observation, a process of understanding the world around them, their role in it, and a celebration of life. I makes me wonder how the Europeans interpreted this ‘style’ of painting if they encountered this work before X-ray became a household term, and how they would have understood the concept of visualising invisible interiors without the context of Röntgen’s discovery.

2 Responses to trip the light…