back in the lab…

How do you make a mung bean remain still and at the same time keep it from drying out? The difficulties sprouting a mung bean for 3D tomography is that they flip over when they turn their sprout down. Mung beans are a hardy variety and they move quickly once their sprout gets going. Because of the rotating bed of the XCT, the object has to be secured on the same axis to remain in focus all 360 degrees. To achieve the clearest image, the base material also needs to contrast from the bean. Water is not an option as surprisingly it is too dense, so Tim proposes to try first a bed of agar jelly. We go to the wet lab to mix it up.

There is something crazy about the wet lab in Applied Maths; not the extreme sterile environment you would expect,  but it has a fantastic experimental atmosphere of tinkering around among countless glass vials. I made a documentation of it in 2006 to try and capture the essence of it and it certainly hasn’t changed much since then.

Recently I viewed the work of German artist, John Bock’s film Fischgrätenmelkstand kippt ins Höhlengleichnis Refugium, (2008 video) at the MCAs, The Beauty of distance: songs of survival in a precarious age, at the 17th Biennale of Sydney. (I am yet to find an official English translation of this title, but my step son fed it into a translation tool with truly hilarious results.)  This work reminded me of the wet lab possibly because I’m viewing it from an artist’s or outsider’s point of view; I’m quite sure the Department does not view their laboratory in quite the same way!

Bock’s absurd and humorous film features an 18th century wigged and powdered inventor and his beautiful but trapped accomplice. Highlighting the complexity of language, narrative, history, performance and sculpture in the pursuit of scientific endeavor, the film is a satire evoking Descarte’s treatise Discourse on the Method of Rightly Conducting One’s Reason and of Seeking Truth in the Sciences (1637). I’ve found the most current review with images of Bock’s work  at de de ce blog.

In terms of my project I found another work at the MCA, Victoria, (2008 video) very relevant and moving. By the Finnish artist Salla Tykkä, Victoria is a ten-minute timelapse on the life cycle of a giant lily as it unfurls its petals in the dark, changing colour from pure white to a red hue as the morning light arrives. This species has very large leaves that can span up to three meters in diameter and the flowers can open up to forty centimeters wide on seven to eight meter stalks. Coincidently this summer I had visited the Adelaide Botanic Gardens and discovered for the first time the Amazon Waterlily Pavilion which is used to care for and propogate the Victorian Amazonica which was introduced into the gardens in 1868. The genus was named after Queen Victoria by John Lindley in October 1837, when the first known specimen was returned from a exploration of the South America’s Amazon (formerly British Guiana). Sadly the lily was not in flower during my visit, however, in the late 1800s the very first bloom of a Victorian Amazonica caused an enormous sensation in Adelaide. So for me, Tykkä’s video incorporated so eloquently all that has passed in terms of the history of observation of the natural world, including the beauty and the wonder.

I quite like this review, The Beauty of Distance in Kant’s aesthetics by Daniel Wilson, especially in consideration of Salla Tykkä’s companion film Airs Above the Ground, which was projected next to Victoria. Both films examine the colour white and the human fascination with beauty and the desire to capture and control nature.

Anyway, Tim and I mix up the agar and put it in the fridge to wait over night. I put a few beans on to soak to be ready; we have joined the queue. Getting on the XCT is the tricky part, the facility is in great demand. Meanwhile I spend time observing and learning the process of Micro 3D X-ray. 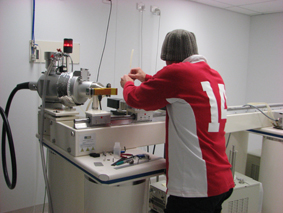 Dr Michael Turner is in there mostly and he tolerates my presence. We discovered we are in fact distant cousins, so he is obliged to put up with me, but Michael is really very inclusive and I’ve come to understand more about the process by sitting next to him and just watching. There is a lot of adjusting. When I began my initial residency the XCT was the first and only machine in the facility. Since then the team has advance the program so they have a bit more external control – before they had to walk in and out and re-program every time. Now they have included a new XCT with a helical base, this means that they can capture more information and larger sections of data. For example, a length of bone or rock, rather than a tiny sample.  But this second XCT is not yet fully operational. They are also working on a third room and it already has its lead lined walls installed and painted.