Day of the Triffids. Image from the BBC series (1981) based on the science fiction novel (1951) by John Wyndham about a marauding gang of intelligent but aggressive bioengineered plants.

The first day I arrive at the High Resolution Plant Phenomics Centre it is a glorious spring morning. It seems hard to believe that we have just lived through the last seven years of drought. Everywhere is green and even the lawns are lush, covered in a blanket of bright yellow daisies. Dr Bob Furbank introduces me to the rest of the team, Alyssa Weirman, Dr Xavier Sirault, Dr David Deerman, Scott Berry, Scott Kwasny, Xueqin Wang and Richard Poiré. First up the indefatigable Frenchman Xavier explains to me in highspeed the mathematics behind the 3D imaging program he is setting up. I then spend the morning with Technical Officer Scott Berry going through a rigorous induction including OH&S, Facility training and before I can become a legitimate CSIRO employee. The HRPPC is a certified PC2 facility and there are strict guidelines to follow, automatic doors to wait for, movement sensor hand washes and colour coded labcoats. The Centre, described as a plant hotel, has a central laboratory is full of large growth cabinets, in which I secretly hope will be full of mutated Triffid like vegetation, but there are a series of very sedate experiments being conducted. Most of the plants I view are scientific modeling plants such as Brachypodium and Arabidopsis. After the overall tour I am introduced to the technology they will let me use. 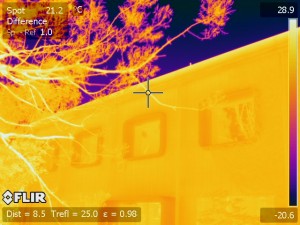 The High Resolution Plant Phenomics Centre as seen through the Infrared camera, contrasted against the icy sky.

First is the infrared Camera, a FLIR SC660, which is a high performance infrared system used for science and research applications within the long wave spectral range. The smooth, shiny lens on this infared camera is made from germanium, and there are two lenses, one on the outside, one on the interior, and the images are detected through these lenses to third, which is the sensor. Scott gives me an overview of the application settings and explains what I’m looking at, and what effects the images such a emesivity. The Centre has a few different types of infrared cameras, for close-up and aerial shots, and this particular hand held one is worth around $110K. I don’t quite believe they are going to set me loose with it. I hear later in the tea-room that the thermal cameras were developed mainly for military purposes, for night vision or through smoke, but they are now available for industry and science. However, infared cameras with powerful zoom lenses are still unavailable on the market because they are the type that pick up people behind walls before you shoot them. Bob Furbank mentions that when they had some consistency trouble with one of their cameras they took it back to the manufacturer who said they never had this kind of complaint before as this type of camera is usually one use only ie; on the control panel of a missile. 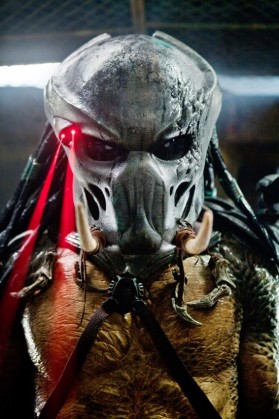 A Predator's hunting helmet increases its ability to see in a variety of spectrums, ranging from the low infrared to the high ultraviolet, and also filters the ambient heat from the area, allowing them to see things with greater clarity and detail.

An objects colour is determined by the wavelengths of light that are absorbed or reflected by the object and we perceive the colour only when the reflected wavelengths reach our eye. This is referred to as an objects spectral reflectance because colour comes from light made up of different wavelengths or frequencies and the variations make different colors. For example, the green in leaves is because most common plants absorb red, orange, blue and violet but reflect all of the green wavelengths. The range of colors that are visible to the human eye can be found on the electromagnetic spectrum within the visible spectrum range. Ultraviolet and infrared are light frequencies which occur on the outside of the visible spectrum but most birds and insects, such as honey bees can see ultraviolet light and snakes can see infrared light. Infrared is electromagnetic radiation with a wavelength longer than that of visible light but shorter than radiation microwaves. The infrared camera picks up the wavelengths that indicate the comparative thermal variations between objects.

Thermal imaging is used by this Centre for capturing the thermal distribution of plants, either individually or over whole crops. It records the temperatures variations in real time, allowing the researchers to see and accurately measure heat production or dissipation process or other factors. They are looking for a comparison between cool and hot plants as cool plants are the ones that are stress resistant, healthy and transpiring. The process that keeps a plant cool is transpiration (a process similar to evaporation), where the plant loses water vapor via mainly the leaves, but also the stems, flowers and  roots. The surfaces of leaves are covered in tiny pores called stomata which are opened and closed by a border of ‘guard cells’ that operate the function of photosynthesis. This is the process that converts carbon dioxide and water, using the energy from sunlight, and releases oxygen as a waste product. If a plant is too wet, dry, sunbaked, cold or in saline water the camera will pick up its stress. 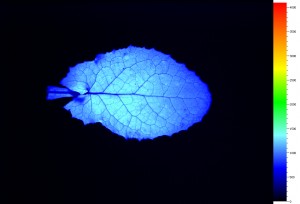 my first leaf in the closed FluorCam.

My next lesson of the day is with the second Technical Officer Scott Kwasny (two Scotts, I resist making jokes about cloning…) who introduces me to the closed and open sytem FluorCams which image the multispectral kinetic fluorescence of plants. To start with we go out into the sunlight and pick a few leaves from the garden to take back inside. We look at the closed FluorCam first, a box which consists mainly of a CCD (charged coupled device) camera, and fixed LED panels. The pulsing red LEDs provide a uniform irradiance capturing the photosynthesis on the sample leaves as pinpoints of light. It is quite beautiful to watch in real-time on screen as it sparkles and fluctuates, but as a data based system, the FluorCam software isn’t set up to capture high resolution images, so I can only gather screen shots. Again, this technology allows them to assess stress resistance in plants. The open system allows for larger sections of plants to be examined, and then they also have a fluorCam controlled by a robotic arm that can take a series of images over several potted plants.

Looking toward the future with the Phenomobile, The CSIRO, High Resolution Plant Phemomics Centre.

Later in the week I am taken out the CSIRO’s Ginenderra Experiment Farm with Carl and Mikala from the CSIRO’s communication team, to see the HRPPC team launch their new instruments, the tethered blimp and the ‘Phenomobile’.  Just on outskirts of urban Canberra, we suddenly turn off the bitumen and make our way down a red dirt road through paddocks of very plush sheep toward a small gathering of cars and odd shaped trailers in the middle of a wheat field. The Phenomobile is ready to go, custom designed to incorporate a golf buggy raised up stilts, it zooms along at about 7km per hour. Mikala tells me she’s trying to get the story into the Top Gear magazine. It’s a cool looking contraption and it’s the first time its been taken out for a spin over the crops. With David at the wheel, they check first to see if it passes the first criteria which is not to crush the plants; designed to straddle a plot, the wheels going either side down the ruts. As it travels it collects measurements, simultaneously gathering data for canopy temperature, canopy volume/biomass and ground cover. Designed to integrate a range of remote sensing technologies for phenomics field measurements at the plot scale, it also has a stereo-imaging rig for 3D reconstruction to image canopy volume, mean plant height and density. 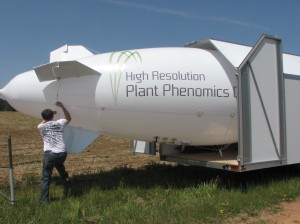 Xavier wrestling the blimp from its trailer.

We then wait patiently for the next exciting moment when they release the blimp from its purpose built trailer. Six meters in length, Xavier backs it out carefully as there is a strong breeze. It bucks around and I watch while the team hold on tight as they fix the camera’s to its undercarriage. They have acquired the blimp as an aerial platform for imaging an entire field at one point in time. Able to carry up to 3kg it will hold both an infrared and a digital colour camera to operating in a height range of 30-80m above the field. The infra-red thermography and colour images will indentify the relative differences in canopy temperature indicating plant water use, an important trait to understand. As it rises higher the blimp scoots about in the sky, its rudders are controlled by a remote it sails into the wind. With the cameras swinging beneath it looks well endowed, overfed kite. Tugging at its tether way up in the sky, contrasting against a deep blue sky crisscrossed with vapor trails, I imagine the birds eye view of the world below.

This entry was posted in project, research. Bookmark the permalink.