Toward the prosecution of this method in Physical Inquiries, I have here and there gleaned up an handful of Observations, in the collection of most of which I made use of Microscopes, and some other Glasses and Instruments that improve the sense; which way I have herein taken, not that there are not multitudes of useful and pleasant Observables, yet uncollected, obvious enough without the helps of Art, but only to promote the use of Mechanical helps for the Senses, both in the surveying the already visible World, and for the discovery of many others hitherto unknown, and to make us, with the great Conqueror, to be affected that we have not yet overcome one World when there are so many others to be discovered, every considerable improvement of Telescopes or Microscopes producing new Worlds and Terra-Incognita’s to our view.  [Robert Hooke 1665, Micrographia: Some Physiological Descriptions of Minute Bodies Made by Magnifying Glasses with Observations and Inquiries Thereupon.] 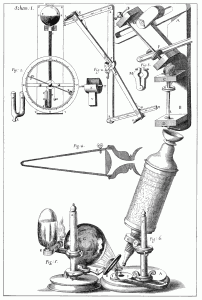 Scheme 1, from Micrographia, an illustration of Hooke's microscope

Micrgraphia, by the English physicist Robert Hooke (1635-1703), is the first book on observations of the natural world through microscopic and telescopic lenses. While studying the heavens above, Hooke also looked more closely at things on Earth. He was the first person to use the word “cell” to identify microscopic structures which he discovered by looking at a thin slice of cork through a magnifying glass of his own construction. As he explains in his chapter “Observ. XVIII. Of the Schematisme or Texture of Cork, and of the Cells and Pores of some other such frothy Bodies.”;

I with the same sharp Penknife, cut off from the former smooth surface an exceeding thin piece of it, and placing it on a black object Plate, because it was it self a white body, and casting the light on it with a deep plano-convex Glass, I could exceeding plainly perceive it to be all perforated and porous, much like a Honey-comb, but that the pores of it were not regular; yet it was not unlike a Honey-comb in these particulars. [Hooke, Micrograhia] 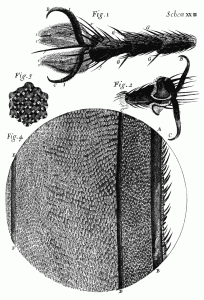 Scheme 23 (fig 23) from Micrographia, Observ. XXXVII. Of the Feet of Flies, and several other Insects.

Hooke was observing a world yet unrevealed, and 346 years later with more capable technology at hand, we are still driven to ascertain the truth about things, known and unknown, down though the layers of cellular and subcellular structures.

Discussing Hooke, Vince Craig (Dept Head App Maths), told me that the action of the cantilever in Atomic Force Microcopy works on the principle of Hooke’s Law of Elasticity. The cantilever, (between 50 – 200 micrometres in length) is the common sensor of the force interaction in atomic force microscopy, and it is the movement of the single point at the end of the cantilever (like a needle on a record player) that studies the topography of surfaces at micro- and nano- scale.

In Hooke’s early investigations and theories in mechanics and physics he discovered the principle behind the action of a spring and developed a simple equation expressing the force generated within a compressed spring in relation to the stress or deformation of material. Hooke invented the balance spring consequently enabling the mechanical workings of clocks to keep regular time. But the curious fact is, that while Hooke examined magnification, it is only now with the invention of more sophisticated technology that the mechanism based on his law of elasticity is utilised for the purpose of microscopy in the AFM, without the glass lens.

There is an AFM at the back of the wet lab and I recently sat in on an instructional session with Tim Senden as he explained how to use the AFM to a group of researchers who needed to use this equipment independently for their own purposes… just adjust that part there without snapping it off, make sure your sample is clean, and there, see how easy it is, etc. Perhaps I missed several of the more technical tips, but it was interesting to learn the basic principles of how an AFM works.

Vince’s images from the AFM are on my website. I finally uploaded the exhibition RAW from Science Week in 2007, that brought together the work of 17 researchers from the ANU Department of Applied Maths, and took it to the School of Art in Photomedia. RAW has some excellent examples of scientific research using contemporary technology and computer visualisation; including images from the AFM and the XCT, mathematical equations, along with technical diagrams and photographs of scientific instruments which they custom build within the department. 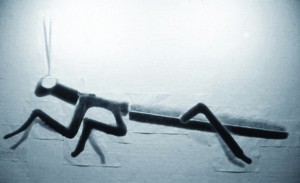 I am fascinated by the ideas of magnification of the microscopic and I’ve always been in awe or fear of radiation or atomic power; perhaps because of my age, nuclear war was a hot topic when I was a kid and the idea of it used to terrify me. Recently when I started posting some of my previous projects on my website,  I realised how much of my work is influenced by the above concepts. An excellent example of this is an experimental piece I made in 2001 where I enlarged a tiny image of a plastic praying mantis into a seven by three meter long work entitled luvamuncher. There are many connections with my past work and the project I am undertaking now.