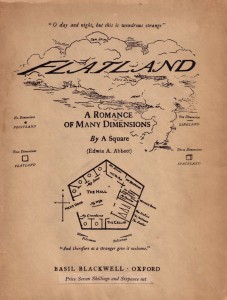 Edwin A.Abbot, Flatland: A Romance of Many Dimensions (cover detail)

AN UNSPEAKABLE HORROR seized me. There was a darkness; then a dizzy, sickening sensation of sight that was not like seeing; I saw a Line that was no Line; Space that was not Space: I was myself, and not myself. When I could find voice, I shrieked loud in agony, “Either this is madness or it is Hell.” “It is neither, calmly replied the voice of the Sphere, “it is Knowledge; it is Three Dimensions: open your eye once again and try to look steadily.”

Edwin A.Abbot, Flatland: A Romance of Many Dimensions [by a Square] Steely & Co, 1884, an exert from the chapter, How I came to Spaceland, and what I saw there…

Flatland, a satirical novella about the social mores of Victorian England, is considered the first creative work to reflect the mathematical theories of the fourth dimension and the departure from Euclidean geometries. It heralded the beginning of popular science and an era where ‘artists, writers and musicians believed they could express higher spatial dimensions’ [Henderson, 1983, p i] to reflect a dissatisfaction with materialism and positivism. Non-Euclidean geometry and the fourth dimension had a profound impact on modern art and literature in France, America, Italy, Holland and Russia in the late 19th and early 20th centuries. 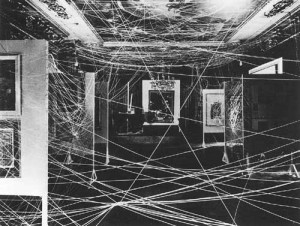 String Theory! Marcel Duchamp, Mile of String, 1942. Always ahead of his time.

The primary resource for this understanding is by Linda Dalrymple Henderson, Professor of Art History at the University of Texas, The Fourth Dimension and Non-Euclidean Geometry in Modern Art [Princeton University Press, 1983]. This book presents Henderson’s in depth study of the cultural consequences at the point of departure from Euclid’s postulate (c 300BC) to emergent theories of hyperbolic and elliptic geometries including the fourth dimension as the most important themes that unified modern art and theory for all time. Her work is a critical analysis of how the pioneering work of mathematicians such as János Bolyai (1802 -1860), Nikolai Lobachevsky (1792–1856), August Möbius (1790-1868) and Charles Howard Hinton (1853 – 1907), influenced the growing discourse which was to shape the modern world as we now know it. She focuses only on artists and writers who kept direct records, such as personal journal entries or public documents, which state their understanding and interest in these topics. In this way, Henderson proves the influence in society as new scientific and mathematical concepts were released and disseminated to the general public through published articles or lectures. As Henderson explains: 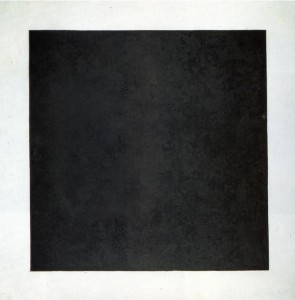 Kasimir Malevich’s Black square 1913. Malevich (1879 – 1935) pioneered abstract painting and Black Square is his signature work. This painting has been interpreted as a visual metaphor for both infinity and the void. For Maleivich the black square signified an endless space when leaving the world of three dimensions.

the complex spatial possibilities suggested by a fourth dimension, as well as by the curved space of non-Euclidean geometry, were the outgrowth of developments in early nineteenth-century geometry. … Like a Black Hole [of the late twentieth century] ‘the fourth dimension’ possessed mysterious qualities that could not be completely understood by scientists themselves.[Henderson 1983, p xxiii.]

Drawing on the fourth dimension and popular science of the time, literary figures such as P.D Oupensky, Alfred Jarry and Ramond Roussel re-imagined the world beyond the immediate sensory perception, creating potential futures for social organisation. This also captured the imagination of artists such as Marcel Duchamp, Kasimir Malevich, Max Weber, Frances Picabia and Laszlo Moholy-Nagy (to name only a few). By challenging the established laws of representation – of life or reality – in art, they contributed to the innovation of movements such as Cubism, Surrealism, Abstraction and Russian Suprematism. 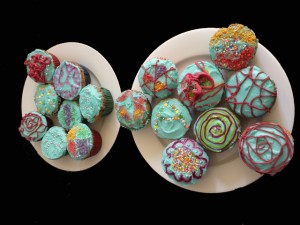 Contemporary Mathematics, Physics and the sciences continue to inspire society, art and culture and it has certainly been an experience getting to know the people in the ANU Department of Applied Mathematics. Its fun making connections between history, art, science and new technologies and learning how mathematics is applied to physical material on a molecular scale. Within the Department, there is a group investigating complex structures and hyperbolic networks lead by Professor Stephen Hyde which includes Dr Vanessa Robins, Myf Evans, Stuart Ramsden and there are many others who come and go such as, Anna Carnerup and Toen Castle, depending on the research projects and available funding. These researchers are great communicators with a great ability to visualise their work through 3D modeling and connect with other visual resources or artists who incorporate geometries or patterns in their work. To find out more about their research I strongly suggest you follow the links and enjoy where it takes you. Unlike the turn of the 20th Century, there is now a plethora of online information and visual aides for mathematical concepts. 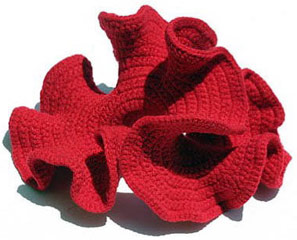 Getting crafty, an more classic example of hyperbolic crochet

Vanessa is the person who introduced me to the concept of hyperbolic knitting when I met her in 2006, with her own sample in red wool. In 1997 Cornell University mathematician Dr Daina Taimina worked out how to make a physical model of hyperbolic space that allows us to tactilely explore the properties of this unique geometry through the process of crochet. This has since developed into the Hyperbolic Coral Reef project by sisters Christine and Margaret Wertheim. I’ve found that I no longer look at kale leaves in quite the same way. Myf has now convinced me that beauty products really are a waste of time, through her investigation on visualising the complex molecular networks that makes up the sub-cellular structure of skin. I have also grown a new appreciation of the work of Maurits Cornelis Escher (1898 –1972). My understanding of Esher’s work was more along the lines of repeat patterns and Möbius inspired architecture, I hadn’t understood the significance of his Circle Limit series as mathematical models for hyperbolic tessellations. 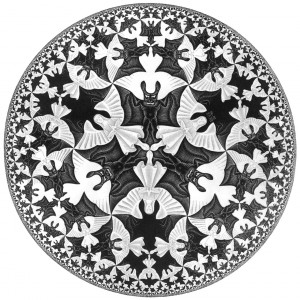 Here also we have the components diminishing in size as they move outwards. The six largest (three white angels and three black devils) are arranged about the centre and radiate from it. The disc is divided into six sections in which, turn and turn about, the angels on a black background and then the devils on a white one, gain the upper hand. in this way, heaven and hell change place six times. In the intermediate, “earthly” stages, they are equivalent. [In the words of M C Escher, in The Graphic Work of M C Escher by M C Escher, Ballantine 1975.] 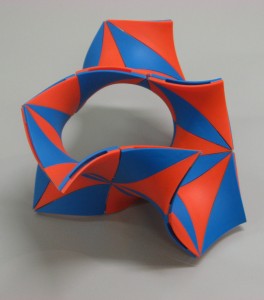 The Gyroid prototype, an example of hyperbolic surfaces and tessellation as a puzzle. Copyright Australian National University.

Stu has been busy in collaboration with Tim Senden, Vince Craig and Gerd Schroeder-Turk, working on a soon to be commerical puzzle named the Gyroid, where individual pieces fit together to make a range of 3D forms based on hyperbolic structures, as one might find in termite tunnels. I’ve watched them go from early prototypes to the first full set of pieces in moulded plastic. Stu has been piecing them together to work out a full range of forms. There are two types of puzzle pieces, barely indistinguishable to a novice, but it is impressive watching Vince, Stu, Myf and Vanessa build the structures in seconds. It took me a couple of minutes to put four together in my first take, but I’m a little bit spatially challenged.  This puzzle is its preliminary stages and will eventually be produced for a commercial market. I have kindly been given permission to reproduce an image of the Gyroid for this blog. It is very cool and a lot of fun.

Earlier this year, Stephen, Myf, Stu and I went on a field trip to Sydney to catch the Olafur Eliasson’s exhibition Take your time at the MCA. Many of his works in this exhibition explore geometric form and refer complex networks in natural and artificially occurring systems. The world around us is full of relationships, rhythms, correlations and patterns, and mathematics underlies all of these, and can be used to predict future outcomes. Eliasson’s work is also driven by the experience and sensation of an event, all of which can be infinitely variable depending on the individual and how the moment unfolds. I enjoyed Take your time because my experience of the exhibition was mediated by the company I was in, which is exactly how Elliason views his work as having a fifth dimension, if you consider the fourth being time, and that this fifth, … 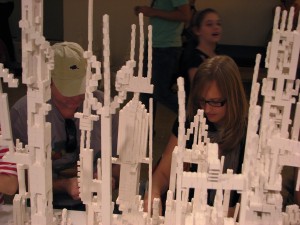 …might also be called the dimension of engagement, because it allows for a greater relativity in our understanding of the other three or four dimensions. To emphasize the importance of engagement, I have tried to connect it with temporality by introducing the idea of Your Engagement Sequence, or YES. Any situation or object can be made relative and negotiable if you insist that YES is a necessary component of the perceptual process. We could say that YES destabilizes truth, turning it into an individual experience.