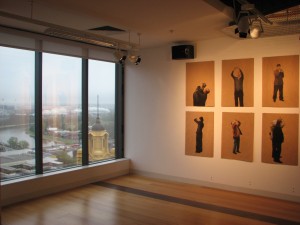 Waratah Lahy's series, Photographing a work of art, 1-6, Charcoal, pastel pencil and conte on craft paper 84 x 59 cm, with the amazing birds-eye view of Melbourne and the Yarra out the window.

We got together initially as a way of supporting each other’s ideas and encouraging each other to keep making, despite the usual setbacks; full time work, children, failed grant applications etc. Alison called us the Saddle Club and the name has stuck. We are all interested in similar things, and are influenced by literature, history, philosophy and science, but our practice is varied. Our work connects through a shared curiosity of how visual narratives are created to describe the moment of passing between fact and fiction. While we have studied in traditional mediums such as painting, sculpture and printmaking, our work is interdisciplinary; themes are worked on and variations of possibilities are teased out through a range of mediums; needlepoint, video, animation, paint, hot glue and collage constructions. The title of the exhibition plays on our collective fascination with observation, metaphor and transposition, but neatly rounds up how each of us digresses, taking the viewer on major detours and transformations before the truth of the matter can be established.

Natural Digression is our first exhibition and if you can, please visit! Its at Victoria University, 300 Flinders St, Melbourne until the 29 October 2010. It’s the first time we have seen our work together and it hangs really well. There is an excellent amount of variation to make the show interesting, and the works are range from being bold, colourful and delicate. One of Al’s works sold with in half an hour or putting it up.  If you’ve missed this exhibition our next one is in Sydney at UTS in March 2011. For this exhibition we are lucky to have curator and writer Yolande Norris on board. 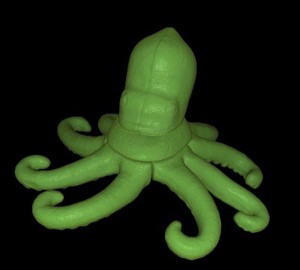 I put some new X-ray rotations in the show. I’ve found that because Drishti has developed and I’ve got a bit better at using it I’ve enjoyed remaking some of my work from Nanoplastica. In this piece I showed at Level 17, Bioplastica, I’ve made only two rotations lurid green, and they slowly reveal the objects internal structure.

Waratah is fascinated by the changes in a person’s physical demeanour, gesture and posture that occurs when they are absorbed in the act of observation, particularly at that instant where a physical change is wrought through the mediated gaze of the camera; the body twisting and contorting to capture the perfect shot. Recording these fleeting images though the eye of her own lens she further explores these subjects though drawing and painting. By encapsulating the fluidity of these moments and retaining a photographic influence, she creates in her work a new and clearly altered space. Waratah holds a Doctor of Philosophy from the ANU School of Art, recently exhibiting at Brenda May Gallery, Sydney, and at the Canberra Museum and Gallery. 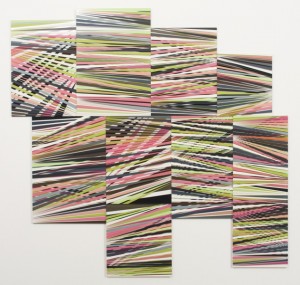 Kirsten Farrell investigates the connection between painting and fiction in that they are both windows into other possible universes. Translating some of her favourite fiction into systems of colour to see how those universes might appear, the stories she has chosen vary from selected chapter titles and James Joyce’s Ulysses as they appear on her ipod; some Dr Seuss; some translated poetry by Sappho and spam email text. Kirsten Farrell is currently a PhD Candidate at the ANU school of Art, Canberra, recently exhibiting at Canberra Museum and Gallery and MOP Sydney.

Ellis Hutch studied Australian Sign Language (AUSLAN) with the purpose of understanding better the subtleties of gesture and how we communicate in the absence of a vocal language. Her video installations, (in the foreground in the top image) of hands signing the poetry of Emily Dickinson in AUSLAN, explore the intersections between sign and language, between codified sign systems and the unconscious physical gestures we all make; interpretation and meaning is abstracted in the silence. Ellis’ current art practice spans between Queanbeyan and Thailand; in between indulging her alter ego, Bullseye Betty, on the Roller Derby circuit. 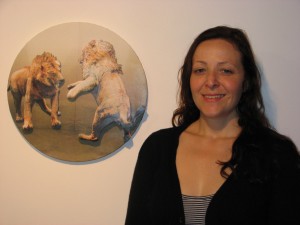 Rose Montebello makes these really intricately cut layers of collage. She is interested in representations of the natural environment,  in particular she perceives the animal kingdom as a place of sublime drama and monumental wonder, where the extremes of life are ever pressing in the form of procreation, survival and inevitably death. Using found images collected from a range of second hand nature books and children’s encyclopaedias from the 1960s, 70s and 80s, she chooses images that capture decisive moments in the lives of wild creatures in the natural world; a place of both simplicity and clarity and beyond the realms of contemporary everyday life. Through detailed cutting, reconstruction and application of paint to an image’s surface, she embellishes and recreates these moments of heightened intensity. Rose was recently artist in residence at Megalo Print Studio, exhibited at Canberra Contemporary Artspace and is an active member of BEAM. 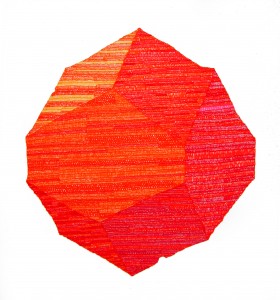 Al Munro uses textile and drawing-based media to examine processes of inscription and translation in relation to scientific representations of the natural world and how these might contain potential for new ways to ‘read’ nature. Her work takes as its starting point a number of visualisations developed contemporary and historical crystallographic texts. Through the use of a ‘drawn’ stitch as a visual analogy for these encoding processes – the individual stitch is a unit of code which can be repeated in an infinite number of ways to create new entities. Al is currently a PhD candidate at the ANU School of Art and recently exhibited at Craft ACT and Brenda May Gallery, Sydney.

(Image to come) Penelope Cain takes as a starting point Darwinian notions of evolution and its applications to human and animal behavioural science to reflect on the contemporary urban condition, positing a co-determinism between human social behaviour and the built urban architecture that surrounds us. She uses drawing, video and photography to tease out these hypotheses. Penny is based in Sydney and most recently exhibited at the Centre for Contemporary Photography, Fitzroy and in Experimenta Utopia Now, The Black Box, Melbourne. She has recently been awarded the Power Institute residency at the Cite International des Arts, Paris, for 2011. 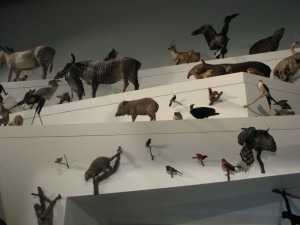 Only four of us, Penny, Kirsten, Rose and myself,  got to go to Melbourne to be at the opening, but it was a lot of fun. While we were in Melbourne Rose and I found some time to check out the Melbourne Museum and the highlight was the new taxidermy display.  The week then ended back in Canberra celebrating PRINT BIG, Megalo Studio + Gallery’s 30th Birthday bash at the Fitter’s workshop. Over 400 people turned up for the Friday night party, and then more than a thousand people visited over the weekend while the displays stayed up.  It was a BIG end to a big week.

After a big weekend, BIG PRINT at the Fitter's workshop, Kingston foreshore, ACT

This entry was posted in excursion. Bookmark the permalink.