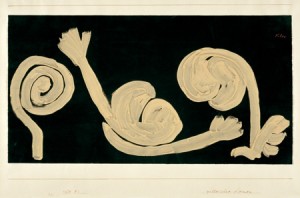 In the next fifty years we must produce more food than we have consumed in the history of mankind.

My project has taken a short but relevant diversion. While clumsily growing mung beans for 3D X-ray it occurred to me that I should visit some folk who know how really to grow things, and the CSIRO’s Plant Industry department was on my radar. Then suddenly (or serendipitously) just before October, I was granted access to the CSIRO’s plant industry facility as part of the Plants Under the Microscope Artist-in-Residence at the High Resolution Plant Phenomics Centre (HRPPC) on Black Mountain; just a short walk up the hill from Applied Mathematics. For two months I will get this amazing opportunity to look at how the Centre’s scientists are perceiving plant growth through new generation computer visualisation and robotic technologies. It has great resonances with my current project.

Only last month I was perusing the CSIRO website for a juicy quote to help with an essay I was writing about my project GROW and I came across an adapted transcript of a speech delivered by Dr Megan Clark, CSIRO’s Chief Executive at the Science and Technology in Society Forum, Japan, on 6 October 2009. In her talk Sustainable Agriculture: Feeding the World, Dr Clark discusses the global concerns for increased food-insecurity, urbanisation and carbon-contraints. Dr Clark described how these three forces combined will reshape the world as we know it. Warning that current crop yields will need to be doubled by 2050 to feed a global population, Clark predicted that to overcome the predominant challenges of reduced natural resources and threat of climate change, the forthcoming agricultural revolution will need to be directed by new technologies and genetic improvements. It would also appear that our desire for bio-fuels is also playing havoc with our need for basic sustenance and the preservation of the natural environment. 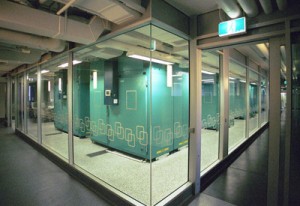 Doubling our current global crop yields in just forty years is a tall order, we are talking several million tonnes annually, but this is where the High Resolution Plant Phenomics Centre comes into play. Opened only last September 2009 it is the grooviest facility, housed in a fabulous retro-fitted space-aged designed building with round edge porthole windows. It is like stepping into a 1960s television set from Get Smart.  Inside it is all smooth lines and glass. As a certified PC2 facility they have to follow guidelines about security so that GM and non-GM crops aren’t trailed in and out – so one waits for automatic doors to close while another one opens. Its all clean and uncluttered, a perfect artist’s studio! I like it so much I’m not sure if they are going to get rid of me that easily at the end of November. The challenge I have been set is to come up with a body of work in six weeks that reflects the Centre’s premise and technology for a small dispay area they have designed and are building in the entrance area.

The HRPPC focuses on ‘deep phenotyping’ which means thoroughly investigating and understanding a plant’s metabolism and physiological process within. They also set out to determine the plants mechanistic behaviour through ‘reverse phenomics’. A plant’s phenotype is any observable characteristic or traits it displays which is the combination of both its genetic expression and the influence of environmental factors. To work out how we grow crops in a changing environment the HRPPC. To work out how to grow crops in a changing environment the HRPPC, is developing and employing  advanced research tools to survey the function and performance of crop species under controlled conditions in the laboratories and out in the field. The HRPPC uses a combination of technologies and apply them through range of robotics, imaging and computing. It probes a whole range of conditions such as drought and salinity tolerance, heat and frost etc. The investigation  focuses on both individual plants and large scale ecosystems. For example they have commissioned a remote control blimp that can hover above while recording information across an entire field. 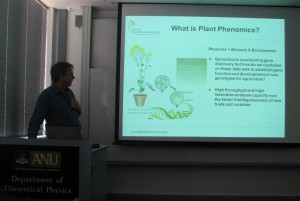 Just before I began my residency Dr Bob Furbank, Scientific Director of the HRPPC,  and Dr John La Salle, Head of the Australian National Insect Collection give a talk to the ANU Department of Applied Mathematics. Both came to explain the e-science and mathematical challenges that a faced in both their facilities. These challenges include bringing together data capture, image analysis, and bioinformatics tools with high throughput Plant Biology; robotics for image capture; high performance and computing (HPC) and maths for image analysis; terabyte storage repositories, ontology driven databases with fast searches. The resonances with Applied Maths is that both divisions are dealing with a balance between visualisation and data extraction through the application of 3D and 4D data. But it is important to recognise that the study of insects and plants differ as both areas are under pressure due changing environmental conditions for the development of rapid data acquisition technology specific to their needs.

As Dr La Salle explains, the insect world needs to be identified expediently as many are threatened with extinction.  Tiny creatures are integral part of any given ecosystem, but that if the ecosystem changes or is destroyed, then if we don’t already know what those important insects or bugs were, then we have little chance of understanding how to repair the damage. Dr Furbank explains that his unique set of challenges include being able to measure systems and discovering what traits need to be measured and how these models will relate to future crops. He explained that while there was a long history of scientific study of plants and that nearly every genome had been counted in all the known crop species, there was still a wide gap between current farming practices and emergent technologies. 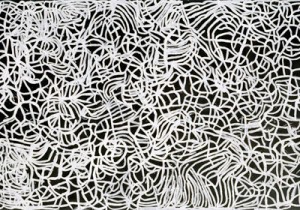 At the end of the talk everyone fell into an in-depth discussion about the development and application of new visualisation and data technologies and if and how such rapid acquisition of data will be possible, or not. It left me contemplating what kind of world there will be in forty years time. I will be 82 in 2050, perhaps I won’t even live that long. I wonder if future generations will loose their connection with the natural environment as predicted by scientists or as described in the collective narrative of science fiction. Will we avoid an environmental catastrophe? It seems as a society we aren’t prepared to make serious sacrifices to change our way of living but is it that we are unconvinced or just plain ignorant of the consequences. For example, it is a complex position to be if we disagree with the genetic modification of food. If we want to keep breeding and eating the way we do and feel PC about our fuels then will we have much choice but to grow GM crops? And what is wrong with genetically modified food when we’ve been cross-pollinating and growing our own favourite varieties for centuries? Do we prefer using litres of destructive pesticides when we can modify the gentic structure of plants to combat pests and disease while retaining the nutritional value?  And how am I going to make sense of all of this through a new body of work?

This entry was posted in project, research. Bookmark the permalink.