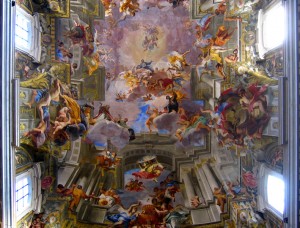 Andrea Pozzo, fresco painting on the ceiling of Sant'Ignazio, Rome, 1685-1694

Recently on ABC TV they ran a 3 part series, Baroque!, with art critic Waldemar Januszczak. In the first episode he discusses Andrea Pozzo’s (1642-1709) anamorphic fresco on the flat ceiling of the Roman Jesuit Church of St. Ignazio. It depicts heaven opening up into an endless space but for an observer it is only possible to benefit from the full trompe-l’oeil effect if you are standing in the correct position, marked on the floor, from below. It is a triumphant masterpiece employing the trickery of depth through perspective, and I thought it was interesting when Januszcak commented on the intended impact of this illusionary vision as not dissimilar to the sensory transportation into the fantasy worlds of online gaming devises such as Second Life. It made me start thinking more about our collective fascination with 3D; considering that 3D display TV is threatening to soon become domesticated, a commercial venture apparently driven by sport, not cinema. 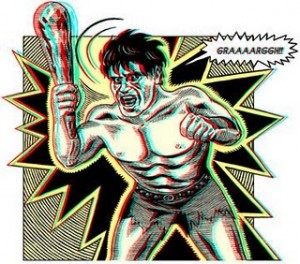 The Incredible Hulk appearing in stereoscopic line art. The Hulk was created c 1962 by, Stan Lee & Jack Kirby. Shy physicist Dr. Bruce Banner is transformed into The Hulk after he is accidentally radiated by a detonated gamma bomb of his own invention, making his life extremely complicated.

I’ve always been a fan of stereoscopic imaging and used to collect comics for that excellent gimmicky effect. A fantastic example of stereoscopic photography I’ve enjoyed recently is the installation of Frank Hurley’s original images of Mawon’s Antarctic expedition, reconstructed by Peter Morse and Paul Bouke at the Tasmanian Museum and Gallery. But I’m showing my age now when I opt out of sitting in a cinema for two and half hours with the kids to watch 3D block busters, convinced I’ll get a migraine. But one of questions I am most asked about in context of my work using 3D microcomputed tomography, what is really 3D about it if we aren’t wearing optical goggles to view it through? I haven’t yet made work with stereoscopic imaging which is possible at Vizlab and with Drishti, and I do find it hard to describe what a true 3D volume is to the non-believer.  I am uncomfortable talking about volumetric pixels or x, y and z coordinates as my natural habitat is the flatlands of bitmaps; although Drew teased me the other day for casually discussing clipping planes in the tea room with Ajay.

A few weeks ago Tim invited me to meet with a group of people at the ANU who were meeting for the first time to talk about 3D imaging. The group comprises of researchers from a wide range of disciplines, physics, paleontology, maths, archeology, but they are all in some way being required to visualise their data in 3D volumes, or perhaps are thinking about ways that 3D volume data or microcomputed investigation would extend their research. The group has formed specifically to share knowledge, network and seek information about what kind of imaging or data technology would best suit their projects. While the concept and abilty of 3D volume and imaging has been around for some time, with the rapidly advancing capabilities of software and programming there are many available options to specific research projects, but at what extent is the computational imaging or process relevant? 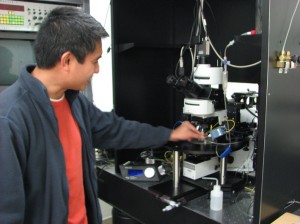 Dr Vincent Daria explaining his Holographic Neurone Stimulator which he custom built for this collaboration.

They decided as a group that the best way to start networking is to visit each other’s research areas or suggest other sections that work with or develop research through 3D imaging.  So I joined in on the excursion to visit the physicist Dr Vincent Daria and his Holographic Neurone Simulator in the John Curtin School of Medical Research. The new building, if you haven’t been, designed by the architectural design firm Lyons, is clad in digitally formed precast concrete panels illustrating four areas of School’s research; from the scale of the human body/humankind to the cellular, the DNA molecule and the chemical bases which make up the DNA molecule represented by, A, G, C and T. Down into the depths of the building we were led until we came to a windowless room. Here Vincent has built this microscope which probes the miniscule neuron’s of rats brains with laser beams to activate the electrical impulses of the dentrites to see how these nerves process information.  He gave us the most amazing demonstration of laser controlled manipulation of yeast cells suspended in water using dynamic optical tweezers.  On top of that his two-photon microscope can image neurons in 3D in preparation for holographic photostimulation of caged neurotransmitters. This instrument is the result of a collaborate project with two neurobiologists, Dr. Christian Stricker and Prof. Steve Redman and physicists Professor Hans Bachor and Dr Vincent Daria. Perhaps the result is a true transdisciplinary event, rather than an interdisciplinary one.

What brought them together were the limitations of conventional methods of experiments using electrode stimulators to activate brain cells in order to understand the complex structures of billions of individual neurones that make up a brain, in this case the humble lab rat, but like our own. What they wanted to achieve was an advanced system that could generate images of living neurones in real time and in 3D while stimulating the neurones in specific points. Keeping the tiny, thin slice of brain alive in liquid, they employ a  programmable light projection of a hologram to create ‘bright spots’ to stimulate precise sections of the neurone to initiate an impulse, the pattern or light direction can changed or relocated within milliseconds. (image to come I promise!).

I found it hard grasping or visualising microscopic 3D holography in this context because not only did it require my own brain to understand the laser technology and the concept of caged cells, I found myself in brand new territory trying to conceptualise the purpose for which this technology is employed in neuroscience. At some point I felt I had fully achieved the sensation of Alice falling down a rabit hole.

So this week I contacted Dr Daria to ask if it was OK if he could take me through it again, and very kindly he did. He spent almost two hours patiently explaining to me the principles of optical physics, the difference between wave frequencies such as femtosecond-pulse and expanded lasers, and the different effect red and blue light sources have on cells, and how this all relates to the holographic confocal microscope and the optical tweezers. He also showed me where they prepare the little brains. They have a slicing device like a mico deli ham shaver, and I got to view some delicate, tiny grey slices being kept alive in a glass vial of aerated liquid. This was important for me as one of the issues I had was visualising what a thin slice of rat brain actually looks like – having never dissected one at school. We also talked about how the research could lead to a better understanding of how the brain works and perhaps one day, hopefully, will lead to simple cures for chronic neurological disorders or even mental illness.